“In 1982, Hendricks and fellow Black artist James “Ari” Montford disguised themselves as members of the press and attended a Ku Klux Klan rally at a baseball field in Norwich, Connecticut. Bravely taking photographs of the secret society’s public rituals, they were surrounded by a crowd of three hundred white people who verbally assaulted the two men with threats and hate speech.”

“After 45 years of educating, curating and creating in more than two dozen arts and academic institutions, exhibiting his work in over 100 shows, earning more than 30 awards and three degrees, Montford is reexamining what it means to have a sense of agency and identity in a tumultuous world. His big thinking, bold intellect and sensitive heart are reflected in his work.”

Pillars of Desire: James Montford and the Guardians of the Br’er Gaze

The Art of Provocation by Cate McQuaid – Boston Globe June 9, 2015

Bannister: The Story Behind the Name 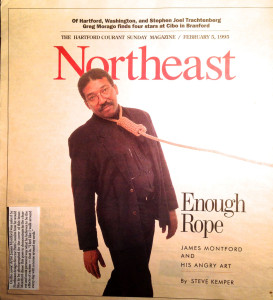 James Montford is on a quest to define “Black Indian,” which, for this seasoned artist, is an ongoing personal and aesthetic exploration. He envisions his work as a conversation—about identity, social justice, oppression, racial stereotypes, and the persuasiveness of myth, such as the myth that we are living in a post-racial world. Employing appropriated racially charged imagery—such as blackface minstrel show figures, so-called pickaninnies and, more recently, the “hands up” posture adopted by activists across the country in response to the arrest and death of Eric Garner in New York City. This poignant gesture also recalls  Goya’s great painting the Third of May. Montford doesn’t shy away from addressing stereotypes and institutional racism head on. For more than 40 years, the mixed race artist  has been both visual storyteller and agitator, drawing on his own experiences of racial confrontation and current events to create two-dimensional artworks, installations, and performance art that are both vile and humorous, elegant and grotesque—a sobering reflection of our racial history but, more frighteningly, of the tumultuous racial landscape we still occupy.

From the Wheaton College Exhibition