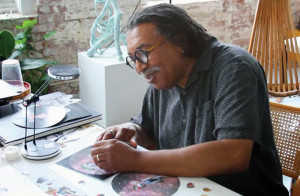 James Montford throws up his hands, saying, “I’ve been doing this for years when the cops stop me.” Odd that anyone would pull over the avuncular Montford: He has an enthusiastic laugh and a friendly face, framed by small round glasses with amber stems. He says he keeps his gray mustache because it works as police repellant.

Montford, though, is exactly the kind of iconoclast that authorities try to suppress. His recent series of collages, Black Indians in Space, pairs appropriated racist caricatures with the usually neutral space motif of shimmering galaxies and distant stars. Montford says his aim is to make work “I know I can’t share with my mother.” 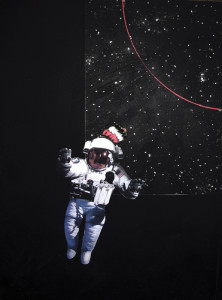 Montford is sharing Black Indians with interested audiences at the Miller-Yezerski and BCA Mills galleries in Boston. Through clever juxtapositions of racist symbols, Montford hopes to “push you to consider your experience.” His threefold ancestry—white, black, Mashantucket Pequot—informs the exploration of race and identity in his work.

Those unfamiliar with Montford might find Black Indians unnerving. Indeed, many viewers might be neophytes, since Montford’s archived almost none of his work online. (He plans to expand his web presence this year.) The 2D Black Indians is like an unopened powder keg: There’s a formidable, biting energy rumbling inside, but it’s not quite as incendiary as his earlier performance work. Crafted over 40 years, Montford’s work has included everything from virtual lynchings to imitating lawn jockeys and a cigar store Indian.

Scattered across Montford’s Providence, RI, studio are the racist ores he mines for inspiration: a mammy statuette with a noose around her neck, a bottle of hot sauce allegedly brewed in “the jungles of Jamaica,” watermelon seeds, a tube of “flesh tint” paint and even a mammy soap dispenser.

“But wait,” says the well-meaning white, “Isn’t racism over? There’s a hashtag for that now.”

The deaths of Eric Garner and Michael Brown may have upped the public’s awareness of systemic racism, but Montford is hesitant to call it progress: “It’s temporary because the institutions haven’t changed.” One of his most recent pieces, Hands Up Don’t Shoot, features an astronaut adapting the now infamous gesture.

“The work resonates later on,” says Montford, who sees his art as “the essence of relational aesthetics.” In plainer words, the viewer’s experience of the work is actually part of—and inseparable from—the artwork itself. Montford’s aesthetic is a brutal one, uncomfortably direct and able to inspire disgust, confusion, aversion—but not without humor.

“[Humor is] important. It creates an entry for the viewer to experience a serious topic,” says Montford. He is like the mythological trickster, a force that upends existing powers through delirious, slapstick magic.

Montford uses humor to bring us closer to tragedy, thus creating room for dialogue. By placing mammies, sambos and golliwogs in space, Montford assures us that unless we have serious conversations about racism and classism, these hatreds will follow us to the rims of the Milky Way.

“White culture has managed to create the appearance of equity. But it’s just the appearance,” said Montford in a 2014 interview with the Providence Phoenix. He exposes the venom of systemic racism by time traveling to the near past and collecting racist curios. Montford shows that the evil of racism has never been slain; it’s only been subterranean, quietly erupting and bubbling over time, operating clandestinely. Montford squirms at his own work. “If I feel uncomfortable with what I’m doing, then I know I’ve done it,” he says.

Though Montford claims he’s “not part of any frikkin’ Afro-futurism,” Black Indians hints at the future. He tells me to revisit this article in 50 years and see what’s changed. Montford wonders: Will there be “hands up” in space?

Alexander Castro is a journalist based in Attleboro, MA. He has a BA in journalism from Roger Williams University.